Home/Philosophy/Verse 40: Truth and Well-being
Previous Next

Dunyā is an abode of truth for the truthful, a sanctuary for those who learn from it…

‘Truthful’ or ‘well-being’ – as used to describe dunyā – are not words that are often associated with the way most people perceive and think of the temporal world. Therefore in order to understand these two assertions, the concepts of ‘truth’ and ‘well-being’ first need to be explored.

The etymology of the Arabic word for truth, ṣidq, suggests that to be true means to describe an object or entity according to traits that it possesses and distance the said object from characteristics which it does not possess. To be false, is the opposite and involves attributing to an entity qualities it does not possess. In Arabic discourse, truth and falsehood are often limited to speech, right and wrong are ascribed to one’s conscience, while good and bad are attributed to one’s deeds. Ḥaq and bāṭil are said to apply to laws and ordinances while detriment and benefit involve tangible objects.

Al-Dai al-Ajal Syedna al-Muʾayyad al-Shirāzī RA has defined truth as that ‘which remains unchanged from its original state.’ Taking this further, he explains that the spiritual realm is not subject to the upheavals man experiences during his life in the temporal realm. This is why the spiritual or divine realm is referred to as Dār al-Salām, i.e. the abode of peace, for it is untainted by falsehood and change and as such it is forever true. Health, in the spiritual world, does not succumb to illness, honor is never besmirched, and fortunes never wane. Yet despite the inherent truth ascribed to the spiritual realm, the temporal world, despite its constant upheavals, can also be considered an abode of truth in that it calls to the spiritual one. Through its constant instability and its persistent state of flux, the temporal world beckons one towards the hereafter and the tranquility and eternal reprieve it bestows. Hence it is an abode of truth, for it calls towards the ultimate abode of truth. Further, by virtue of their calling towards the abode of truth that is the hereafter, Awliyāʾ Allah AS (Allah’s beloved) are also known as the Truthful. Dunyā is an abode of truth for it is only here that one can hope to seek and find the companionship of the Truthful, faith in whom will in turn lead to the realm of truth as stated in the Quran:

O Mumineen, maintain Allah’s taqwā and be with the Truthful

The notions of truth and well-being are brought together by the word imān (faith) which includes both amongst its many meanings. The pairing of truth and well-being in this verse alludes to the fact that only in dunyā can one attain imān and through it ascend to the hereafter, ultimately ensuring the eternal well-being and salvation of his soul. In order to attain salvation, one must be wise to his purpose in this world, and desist from all that may potentially detract him from its path.

To have or embrace imān means for a person to accept what is being conveyed to him or her as the truth, largely out of trust in the person conveying this information. Faith, in its varying forms, is a prerequisite for anyone who wishes to acquire knowledge. The Prophets AS initially called their people to embrace their message and teaching, even when it might lie beyond the grasp of their intellect and comprehension. Having embraced their teachings, those who responded to the Prophets’ calls became Mumineen. The Prophets AS then directed them to profess these beliefs with heartfelt conviction and by doing so, Mumineen became known as Siddiqeen (the Truthful, those committed to the Truth). Initially, advancement in faith is achieved only by accepting the veracity of the individual who conveys the teachings of the faith. It may not always be possible for an initiate to demand proof at the onset, just as blind faith is undesirable once one has advanced in his learning.

Since imān is to believe in the truth, the next question that arises is what are these truths? Imān consists of proclaiming the following five beliefs:

Speaking truth and acting righteously are traits of the Almighty who, according to the philosophy of life outlined in Rasāʾil Ikhwān al-Ṣafāʾ, man is to emulate to the greatest extent humanly possible. Elsewhere, while defining a human being’s true strength, Imam Ahmed al-Mastur AS explains how such emulation is possible: by man refraining from falsehood in his speech, baseless notions in his beliefs, fallacies in his knowledge, immorality in his character, evil in his deeds, mistakes in his acts and shortcomings in his crafts. Imam AS then counsels readers to expend their efforts emulating the Almighty in these qualities, eventually becoming worthy of appearing before Him. 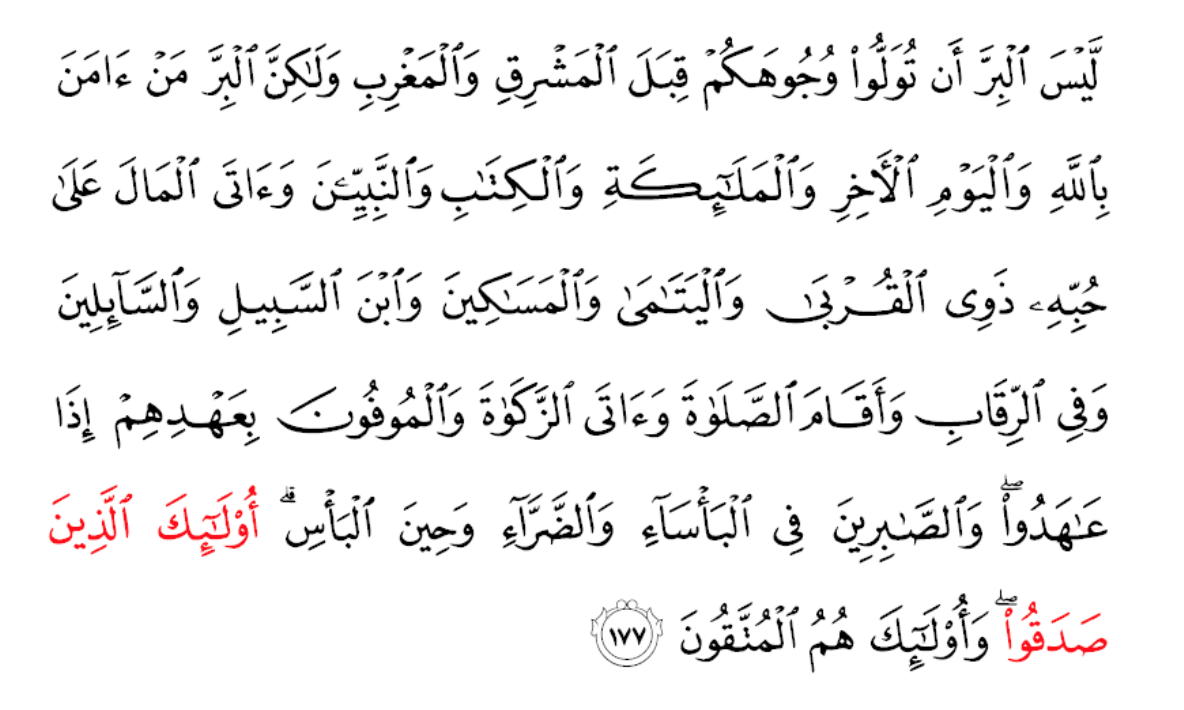 Righteousness is not to turn your faces toward the east or the west, but [true] righteousness is the imān of Allah, the Last Day, the angels, the Book, and the Prophets and in giving one’s wealth, in spite of love for it, to relatives, orphans, the needy, the traveller, those who ask [for help] and for freeing slaves; and in praying namaz and offering zakat; and in keeping the pledges they make; and in remaining patient in poverty and hardship and during battle. They are the ones who have been true, and they are the pious.

The second-half of the verse, known in Arabic as ʿajz, states that dunyā is a place of ʿāfīiya, or well-being, for the wise and distinguished. One meaning of ʿāfīya is complete health. Fortune in this world thus, is determined not only by wealth, but by health as well and it has been the mandate of Allah’s Prophets AS throughout the ages to ensure both the spiritual and physical health and well-being of mankind. However, the laws and tenets laid down by Prophets varied according to the needs of their times and the requirements of their people. In this way, Prophets are similar to doctors who are responsible for maintaining their patients’ existing health while also assisting them in recovering aspects of their health that may have diminished or waned. However, the preventive treatments they prescribe and the medication they administer depend entirely on the patient, the time and the location.

The soul uses the body as a vehicle towards attaining perfection. The body’s ability to carry out acts of worship, which in turn illuminate the soul and ensure its ascendance, is contingent upon its physical health and well-being. Allah’s devotees and beloveds have counselled the faithful to mind the nourishment of both their bodies and their souls. The health and well-being of the body, as they have described, is achieved by restricting one’s diet to foods which descend from the skies or grow from the earth and drinking water regularly. When one follows such a diet, refraining from gluttony and habituating one’s self to hunger as appropriate, he or she will remain in good health. However, even with discipline and precaution, man can succumb to illness as an ever-persistent reminder of his body’s mortality and transience.

According to Amirul Mumineen AS, all hardships, when compared to the difficulty and permanence of hellfire, are ʿāfiya. Despite the upheavals and adversities one faces in this world, he is in fact in a state of well-being when compared to what he may face in the hereafter as a result of any shortcomings and negligence in his acts and deeds. Thus, though he may be afflicted by hardships in dunyā, it is through the well-being that it affords and the opportunity for repentance it provides, that man is able to procure safety from the eternal hardship of hellfire. This is why Amirul Mumineen AS states that he has never fretted over a sin which has been followed by the time to pray two rakʿats for forgiveness and beseech Allah for ʿāfiya. Since it provides the time and opportunity, the temporal world is thus, for the wise and distinguished, an abode of ʿāfīya and the means to eternal ʿāfīya.

It is customary in Arabic parlance to describe an individual who regularly hosts guests as ‘rajul kathīir al-ʿāfiya’, a man of much ʿāfiya. The timeless message of the transient nature of this world communicated to us by the passing of all those before us, has made it clear that we are but her guests in this temporal realm; the world is our gracious, ʿāfiya-granting host. She offers the ultimate hospitality by supplying us with provision for our final journey, if only we are wise enough to take it. Eventually, like all guests, there will inevitably come a time when we too are required to bid farewell to our host, relinquish her hospitality and depart our temporary place of residence for our permanent home and domicile.

The dunyā is indeed an abode of truth and well-being, but only for those who are truthful and discerning. This stipulation requires an individual to perceive the world for what it truly is and what it offers him. Only then will he be able to attain true well-being.