In 1225/1810, the 43rd dāʿī Syedna Abdeʿali Saifuddin RA constructed an academy in Surat that consisted of designated areas for teaching, student residences and a masjid. Syedna placed this academy, Darse Saifee, adjacent to his residence to signify the deep value and respect he accorded to education and its seekers. He then enhanced the traditional educational system by demarcating clearly defined stages of learning and assigning standards to the curriculum. He continuously maintained a personal interest in the affairs of students, often observing and personally supervising them in their various activities.

Syedna Abdeʿali Saifuddin RA made an important contribution to the development of Arabic language in South Asia by developing a methodology which enabled students to quickly become proficient in Arabic. Arabic vocabulary and grammar were indirectly acquired by beginners through the introduction of complex Arabic texts which were orally translated and explained by instructors. This method was in contrast to the one prevalent at the time which involved a thorough schooling in grammar and vocabulary before introducing Arabic study texts.

A vital element in this method of instruction was the use of Lisān al-Daʿwa: the vernacular of the Dawoodi Bohra community. A structural derivative of Gujrati written in the Arabic script, Lisān al-Daʿwa’s vocabulary mainly consists of Arabic, Persian, Urdu and Sanskrit lexicon. The usage of Lisān al-Daʿwa facilitates easy acquisition of Arabic. The pivotal decision to study texts in their original Arabic has enabled students to accurately fathom the intricacies of meaning, and has led to Aljamea becoming a centre of excellence in Arabic studies in South Asia.

An exceptional scholar and writer, Syedna Saifuddin RA was referred to as ‘Muʾayyad Asghar’, a reference to Syedna al-Muʿayyad al-Shirazi RA (d. 471/1078), the author of eight hundred majālis (sermons) on Fatimi thought and philosophy. Syedna Saifuddin RA wrote a number of epistles and literary works which clarified ambiguities pertaining to Fatimi thought and jurisprudence. Due to his keen interest in the dissemination of knowledge, he oversaw the writing of historical and jurisprudential works such as the elaboration of the chapter of marriage from Daʿāʾim al-Islam by Syedi Ibrahim Saifee QR and a condensed history of Fatimi imams and their dāʿīs by Syedi Shaikh Qutub bin Sulayman  QR. Syedna was also an administrator par excellence and the governance of the community was regulated and formalised during his tenure. He devised an unprecedented, systematic documentation process for marriages within the community and provided guidelines for the organs of Dawat to function efficiently. 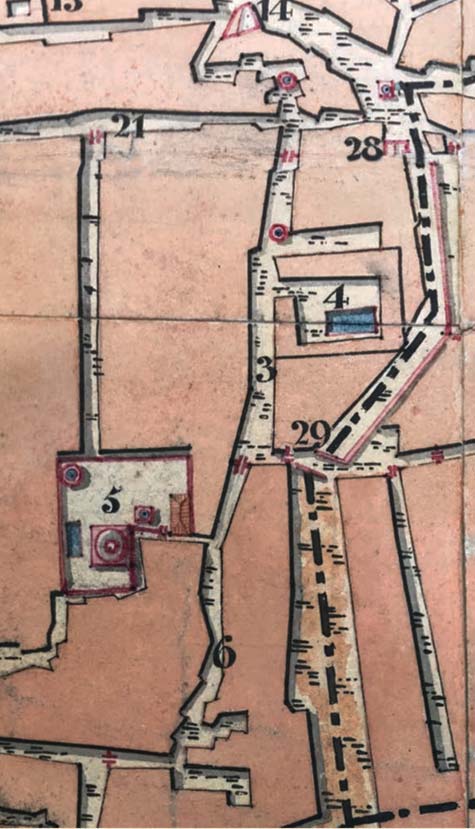 One of the earliest depictions of Darse Saifee (marked number 4 in the map) in a Plan of the City of Surat commissioned by the British Revenue Survey Department of Gujarat in 1817. It shows the Academy in the Sultanpoora area as it was when first built by Syedna Abdeʿali Saifuddin RA: a large building of multiple floors with a central courtyard around which students and faculty lived and studied. In the plan’s accompanying volume, the surveyors describe the ‘mudrusa or college’ as ‘appropriated chiefly for the instruction of boys of the sect who coming from a distance are lodged and fed here; at present 200 boys are said to be taught here, some of them are natives of Agra and Dehli.’