A brief history of
Aljamea-tus-Saifiyah

The history of Aljamea-tus-Saifiyah is synonymous with the history and tradition of Fatimi education established at the dawn of Islam. Although Aljamea today is in the form of a physical institute, in spirit Aljamea is the educational legacy of the Dawoodi Bohra community.

The bedrock of this movement has always been and will always remain the Holy Quran, which in its first articulation asked the Nabi Mohammed SAW, and through him, all of humankind to read and learn. The Prophet SAW made the pursuit of knowledge an obligation for every Muslim man and woman. He, along with his legatee and wasī, Amirul Mumineen Maulana Ali bin Abi Talib AS, and the imams of their progeny ensured that the repository of divine knowledge and its tradition of learning would continue in the form of a dynamic movement through the ages.

This movement blossomed during the course of the second/eighth century when Imam Mohammed al-Baqir AS and Imam Jaʿfar al-Sadiq AS, the 4th and 5th imams respectively, categorised and elaborated upon the corpus of jurisprudential knowledge they inherited from their noble grandfather the Prophet Mohammed SAW and educated a generation of notable jurists. The encyclopaedic epistles of Ikhwān al-Safāʾ, composed by Imam Ahmad al-Taqi AS during the third/eighth century, illustrated the divine nature of knowledge and confronted an unsound rationalistic dogma that had spread across the Islamic world intended to undermine prophetic revelation. The epistles prove that divine revelation encompasses other philosophies and branches of knowledge and that each discipline, when perceived with the discerning eye of the imam, attests to the oneness of Allah and can be a means of becoming closer to Him.

The foundations established by these imams impelled a civilisation that saw all forms of learning flower upon an epistemology soundly rooted in the Islamic value system. Science and philosophies developed under the firm belief of a created purposeful universe. In this milieu, the Fatimi state, headed by the imam AS from the progeny of the Prophet SAW, excelled and bequeathed to posterity its rich philosophy of education and noble legacy of knowledge. 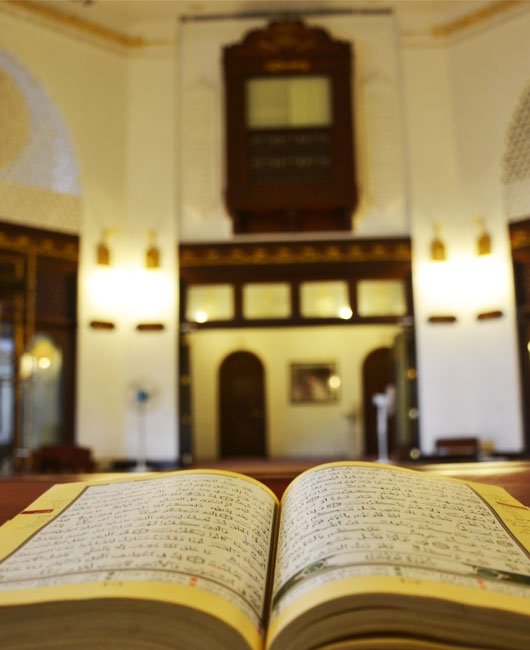 ‘In the light of revelation’ The Quran, a casement through which the world is perceived at Aljamea.

Al-AZHAR, THE GATEWAY TO KNOWLEDGE

Soon after founding the city of Cairo, al-Imam al-Muʿizz li Deen Allah AS established al-Azhar University, one of the oldest universities in the world still in operation. Teaching sessions were initiated in 365/975, and in due course Azhar became renowned throughout the Muslim world for the quality of its tuition and for the provision of free boarding and lodging to its students. Imam’s chief justice Syedna al-Qadi al-Nuʿman RA was a prolific writer who authored books on jurisprudence, history, ethics and philosophy. His comprehensive jurisprudential work Daʿāʾim al-Islam was and remains the authoritative Fatimi code of law. Similarly, in 395/1005 al-Imam al-Hakim bi Amr Allah AS founded the House of Knowledge in Cairo which attracted intellectuals from all over the world. The subjects taught included history, literature, jurisprudence, lexicology, grammar, law and medicine. The house and its magnificent library of thousands of works were open to all. His chief dāʿī, Syedna Hamiduddin al-Kirmani RA exhibited mastery over many disciplines, the most notable among them being philosophy on which he has written a number of significant works. This efflorescence of scholarship reached its zenith with the eight hundred treatises of Syedna al-Muʾayyad al-Shirazi RA which combined commentaries on Quranic interpretation and Fatimi philosophy in an unprecedented manner of dialectic discourse.

Image: Al-Azhar, one of the oldest universities in the world still in operation.

YEMEN BECOMES THE CENTRE OF LEARNING

Following the seclusion of the imams, their vicegerents, the duʿāt mutlaqīn RA preserved and enriched the tradition of education and learning that was the essence of Fatimi civilization. The duʿāt fostered the Fatimi educational system in Yemen and continued documenting the history and philosophical heritage of the imams in writing, building up a priceless library of texts. Treatises composed by Tayyibi dāʿīs in Yemen represent one of the greatest corpuses of literature on the concepts of Ismaili and Fatimi cosmology, theology as well as philosophy, and are the focus of scholarly study to this very day.

Image: Perched atop the Haraz mountains, al-Hutaib al-Mubārak was a locus of learning for many centuries.

Over four centuries ago in 946/1539, when the duʿāt came to India the locus of learning shifted with them. Ahmedabad, a city in western India soon became the seat of Dawat where the 27th dāʿī, Syedna Dawood bin Qutubshah RA, established an academy for Fatimi theology.

Since the community at that time was perceived and labelled as a non-conforming, heretical minority by various governors and clerics, it suffered extensive persecution and discrimination at their hands. However, the duʿāt adhered to their traditions of learning, never failing to fulfil their responsibilities even in the direst of circumstances. In these trying times, teaching sessions were sometimes held on rooftops late at night or even in underground shelters.

This movement shifted with the duʿāt as their seat of Dawat moved from Ahmedabad to other cities in India such as Jamnagar, Mandvi, Ujjain, Burhanpur and finally to Surat. In 1225/1810 almost after three centuries, this educational movement was institutionalised by the 43rd dāʿī, Syedna Abdeʿali Saifuddin RA, in Surat and took the name of Darse Saifee. In this purpose-built academy, funded from Syedna Saifuddin’s RA own personal wealth, stages of learning were defined and an academic hierarchy was formed. After centuries of transition and flux, the educational movement of the Dawoodi Bohra community took root in the city of Surat, India.