The crowning moment for the growth and development of Aljamea-tus-Saifiyah undoubtedly came during the late His Holiness Syedna Mohammed Burhanuddin’s RA 100th birthday celebrations when he announced the establishment of a third campus of the Academy in Nairobi, Kenya.

Four renowned firms were short-listed in 2012 and after a series of submissions and a final round of deliberation at His Holiness’ residence in Mumbai, the New York team FXFowle, Frederic Schwartz Architects (later becoming ROMINES Architecture), Burhani Design-Build and a team of consultants was chosen as the final design team for the campus. The winning entry showed the greatest promise for achieving the client’s primary design brief: an educational campus inspired by Islamic ideals, embodying Fatimi architecture and culture and infused with design and technology of the 21st century.

Pictured Right: An artist’s initial impression of the ‘Radiant Axis’, a thoroughfare that spans the width of the Nairobi campus, following the diurnal path of the sun from east to west.

A year of intense planning and designing ensued which included educational and cultural immersion visits by the architects to India and Egypt, primary sources of inspiration for the campus, as well as multiple meetings with Jamea’s rectors, their advisory council, the Quranic arts department, and students and faculty. In due course, by the grace and blessings of the Almighty and inspired by the vision of His Holiness Dr Syedna Mohammed Burhanuddin RA and His Holiness Dr Syedna Mufaddal Saifuddin TUS, the architects, their consultants and Aljamea representatives were able to develop a master plan that represented both the Academy’s history and legacy as well as its aspirations and hopes for the future.

The Beginning of Construction

The end of 2013 saw the beginning of construction for the Nairobi Jamea campus as Syedna Burhanuddin’s son and successor, His Holiness Dr Syedna Mufaddal Saifuddin TUS presided over the foundation laying ceremony on his respected father’s behalf.

A few months later, however, the Dawoodi Bohra community was devastated by the news of His Holiness Dr Syedna Mohammed Burhanuddin’s RA passing, the benevolent benefactor of Aljamea for over fifty years. Although burdened by this loss, the Dawoodi Bohra community’s new leader, the 53rd al-Dāʿī al-Mutlaq His Holiness Dr Syedna Mufaddal Saifuddin TUS, instructed that the Jamea construction project move forward, renewing the zeal and dedication towards building an architectural legacy that would celebrate the life of the late His Holiness and his love for Aljamea-tus-Saifiyah.

Site work began with the excavation of basement areas of the campus and quickly followed with RCC foundations and block work. The plan for construction initially entailed multiple phases of building. However, under instructions from His Holiness to expedite, the site construction team abandoned phasing and implemented an ambitious construction schedule uncommon to the region.

The hope was to build a world-class facility without compromise or delay, so that the hundreds of students who were studying at temporary facilities near the campus, could move into their new home. When the annual examination for the academic year of 2016/2017 neared, Syedna Mufaddal Saifuddin TUS conveyed his desire that the campus, with over a year’s worth of work left, be ready in a few short months to host the examination normally done so in Surat. With the help of thousands of volunteers including Aljamea students and faculty who busied themselves clearing debris, planting trees and shrubs, and painting walls and the addition of supplementary work forces at the site, the campus is now complete.

Salient Features of the Campus 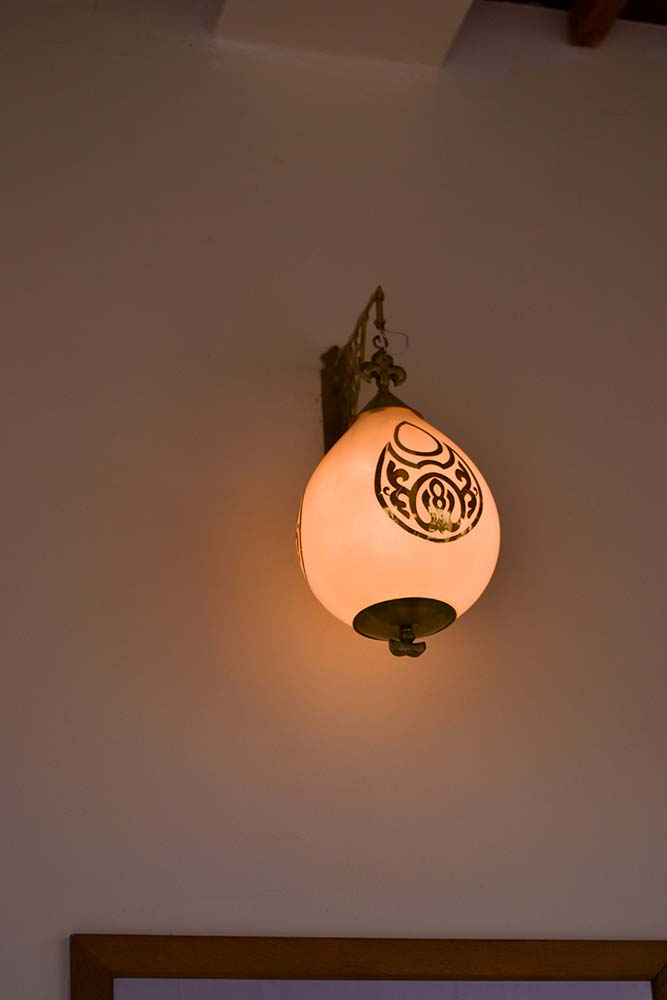 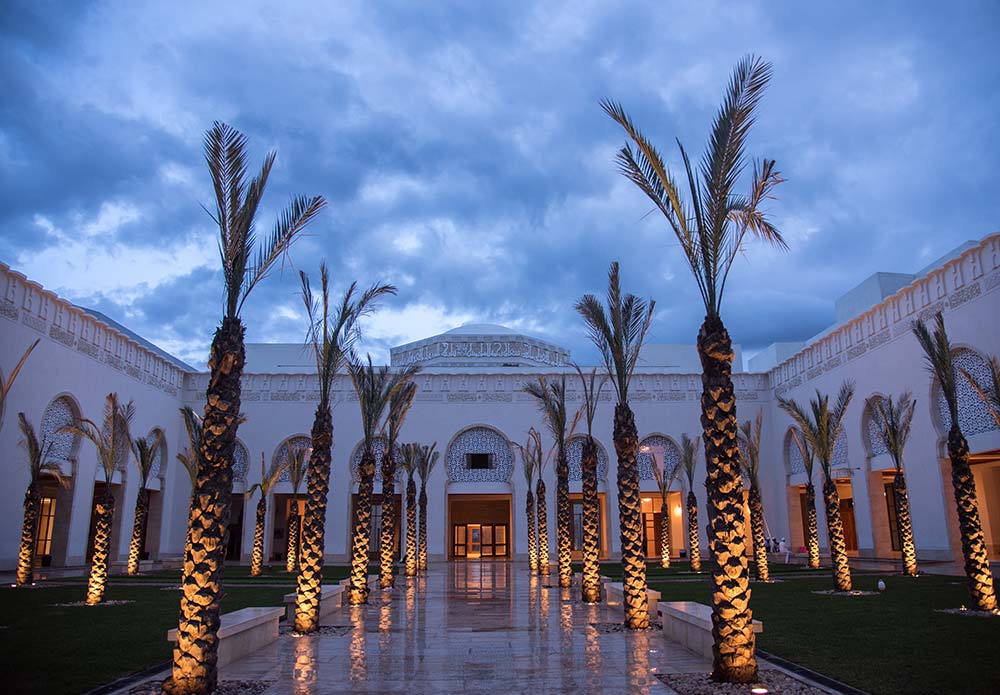 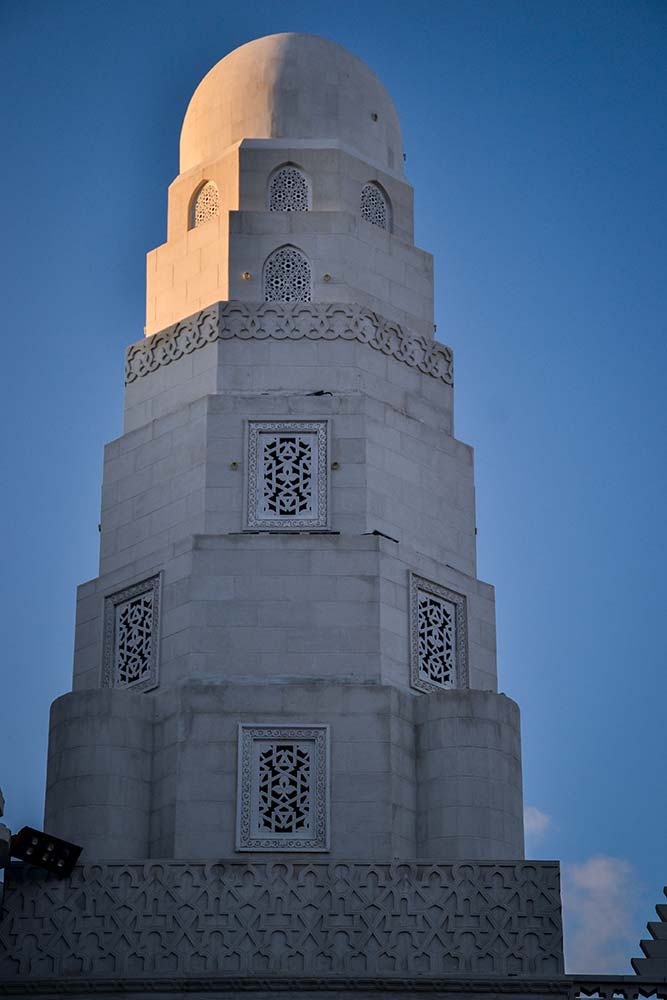 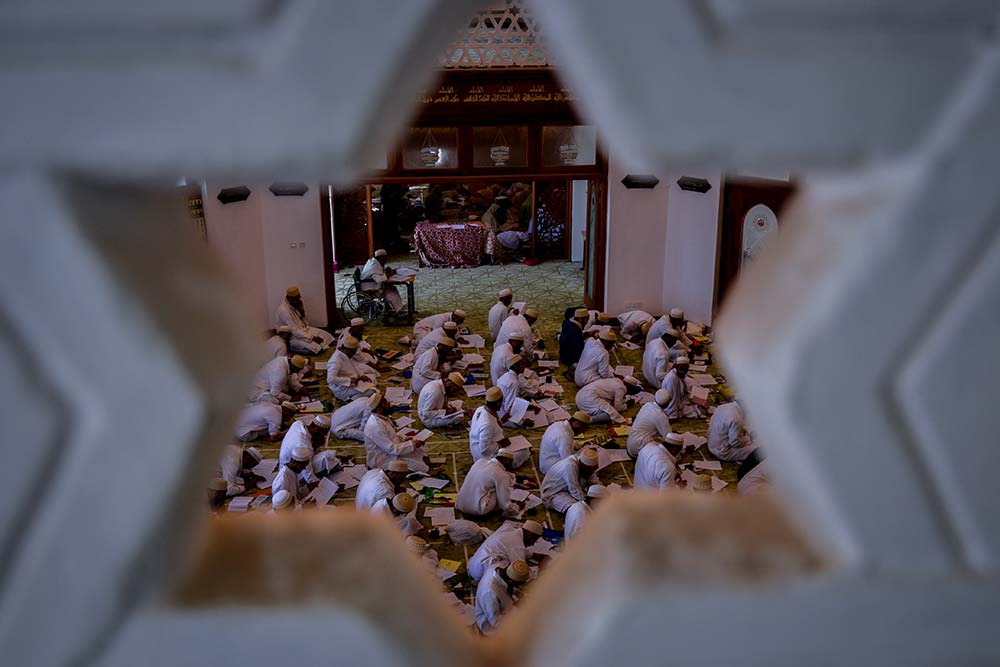 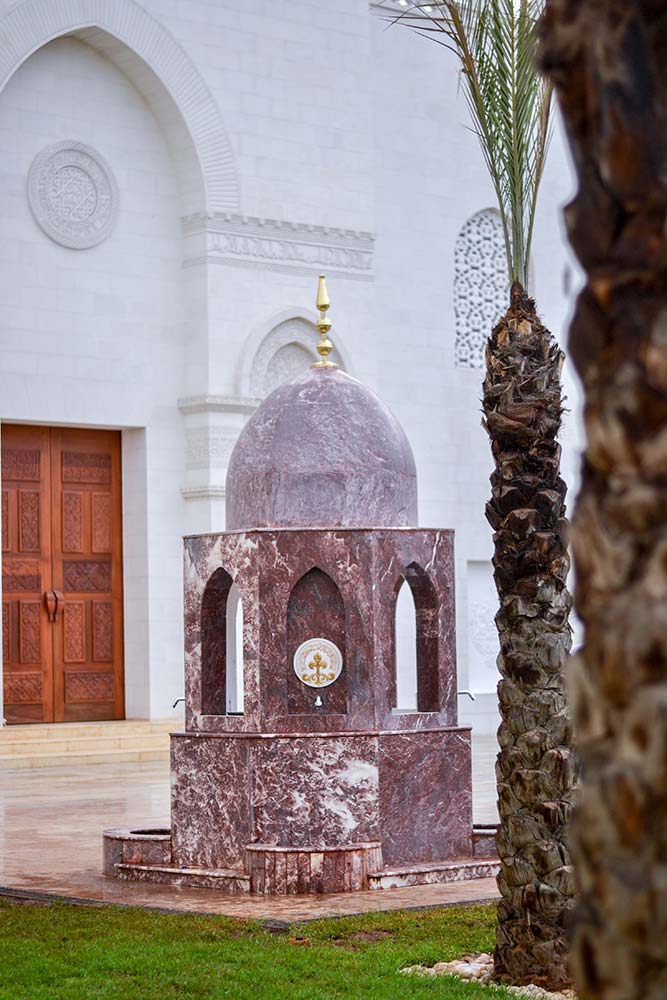 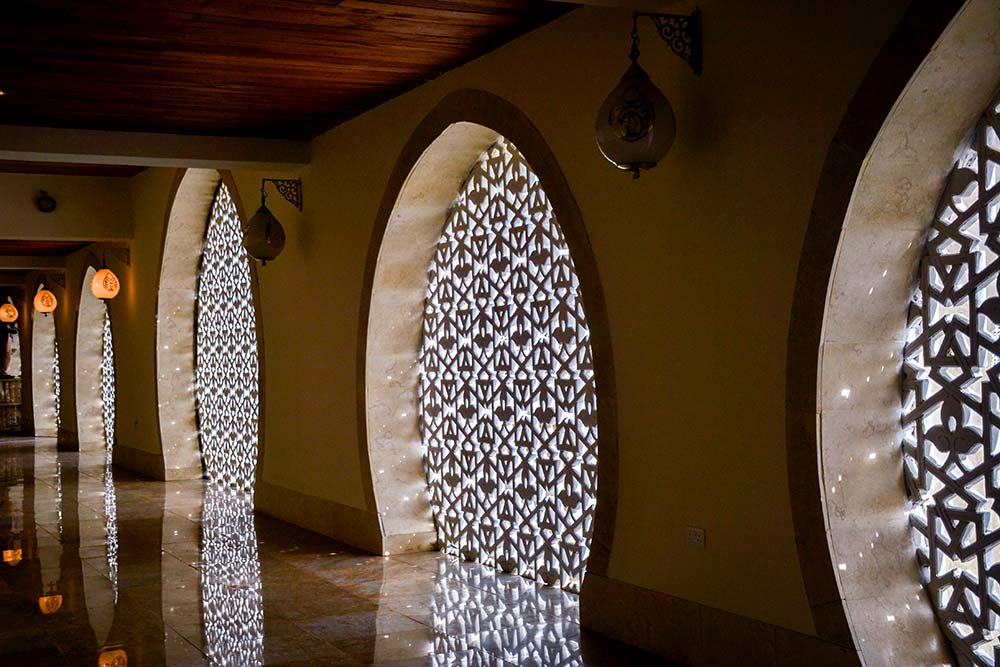 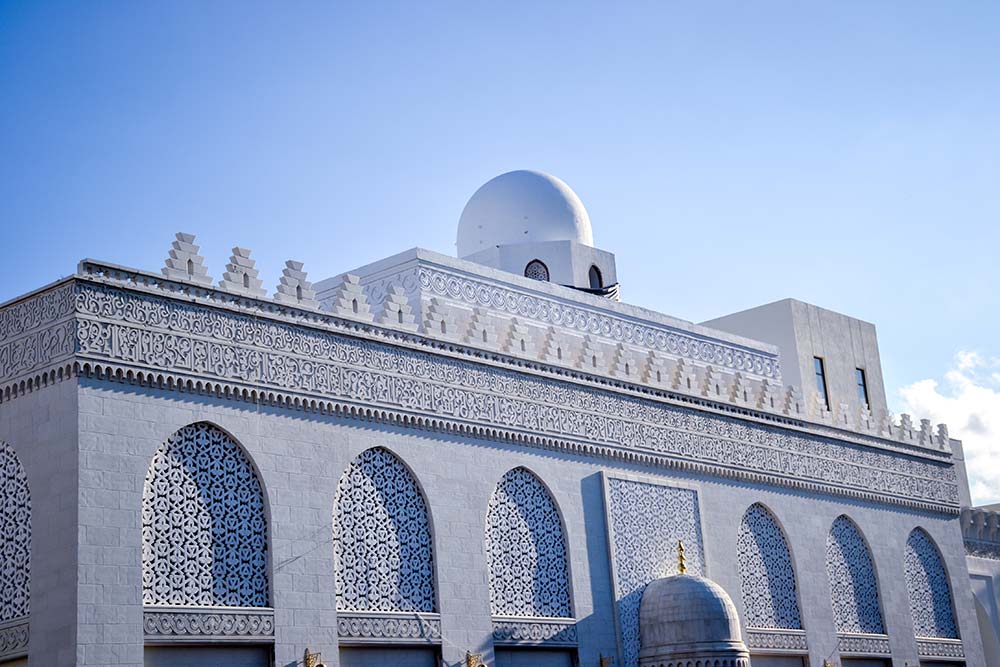 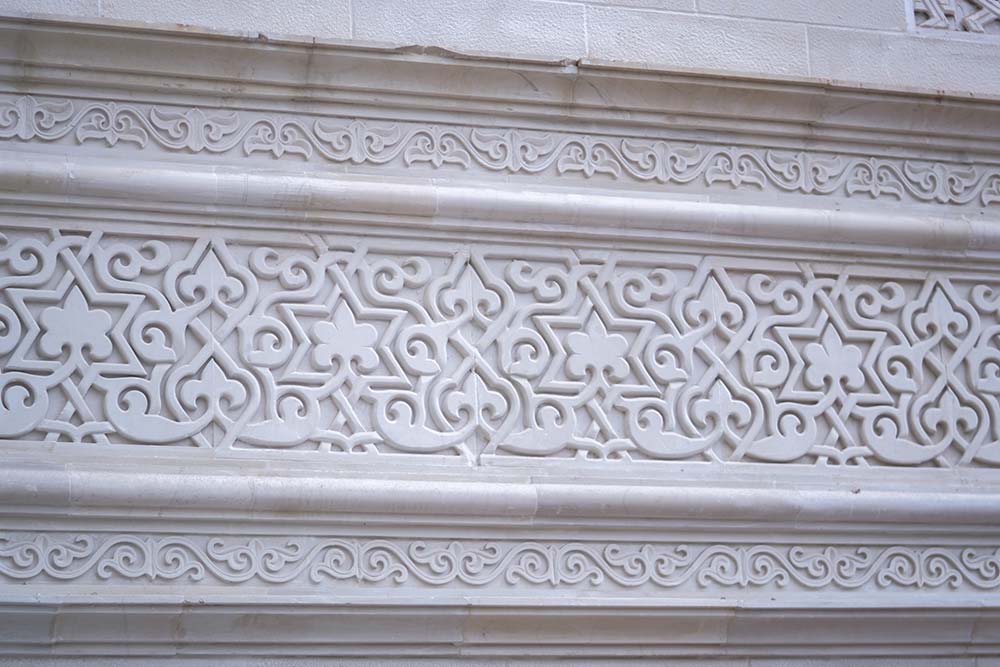 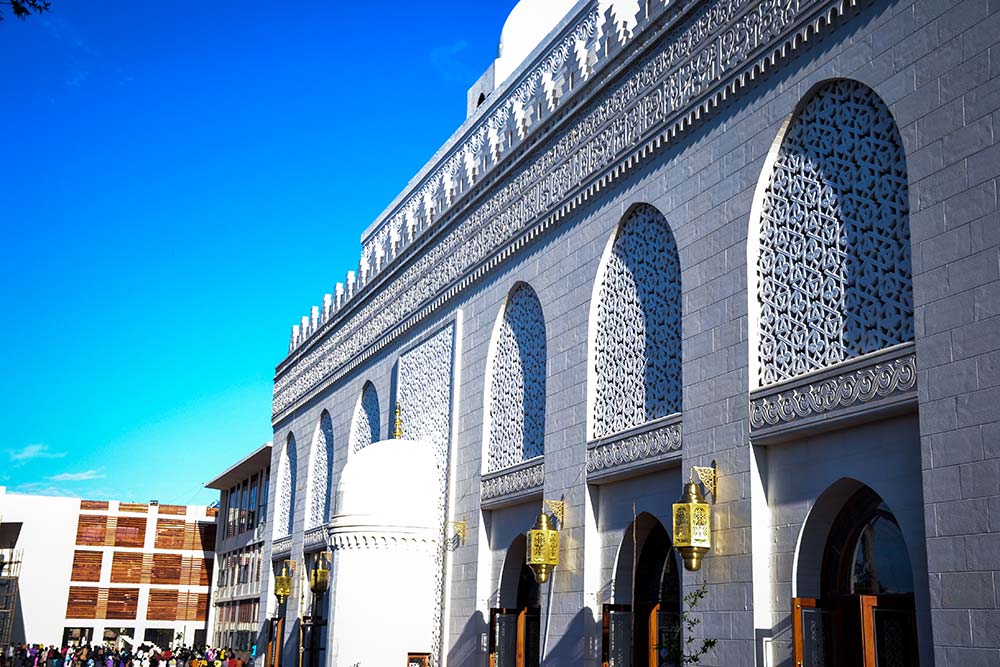 The creative use of Fatimi architectural elements, layouts and design motifs from North Africa, Egypt, Yemen and India as representation of multiple periods of the community’s history.

Quranic verses and Arabic prose and poetry in different scripts on the major façades and walls of the core buildings. 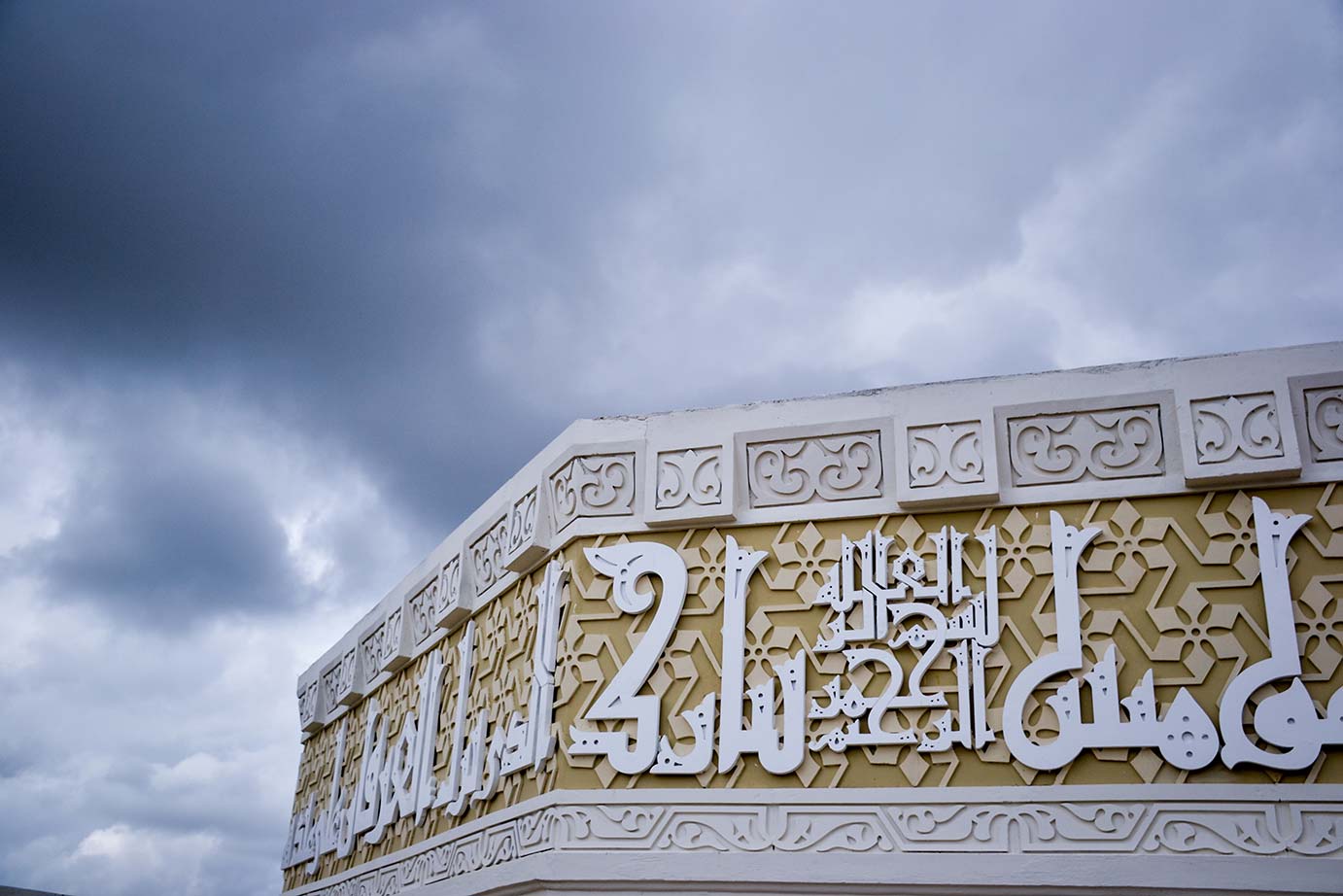 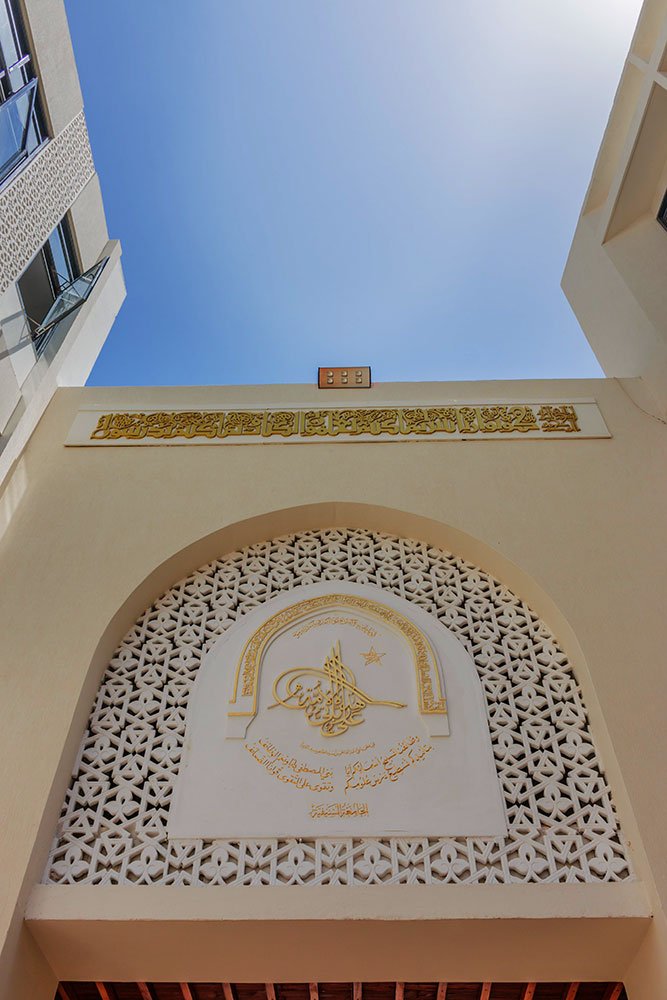 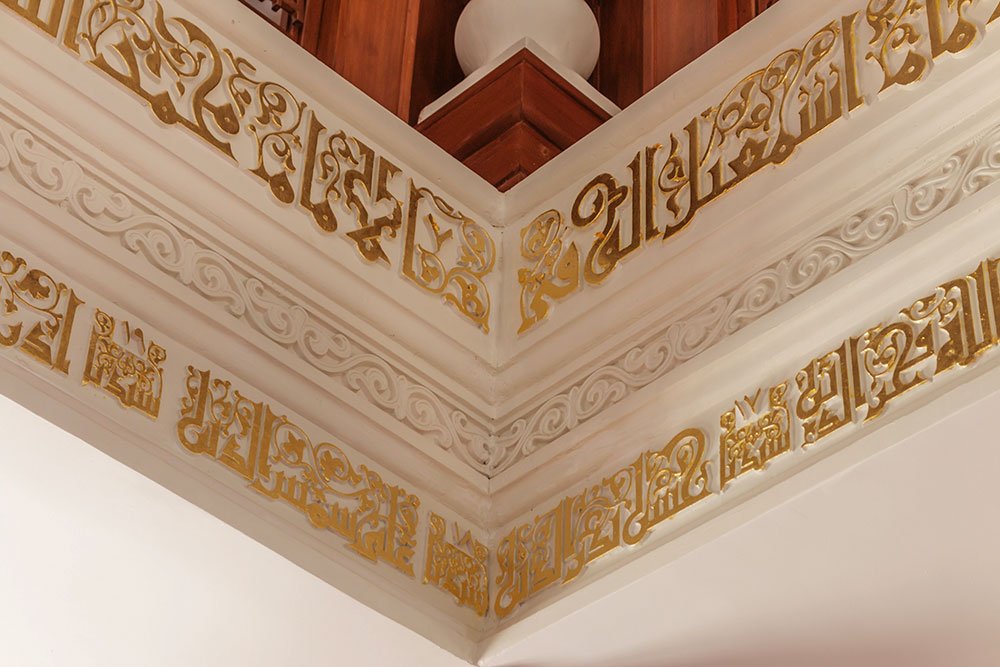 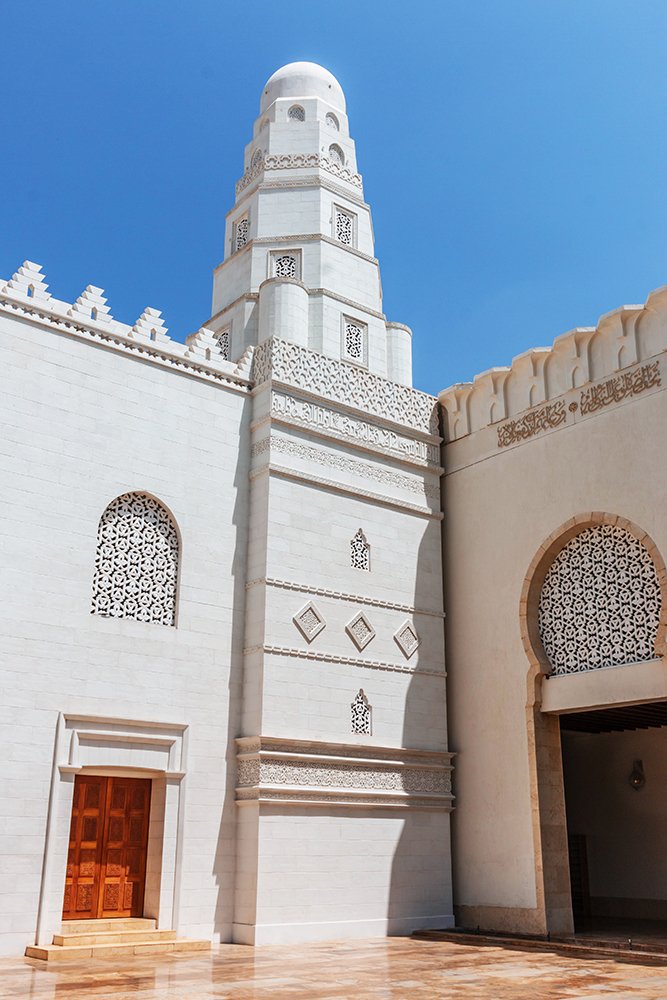 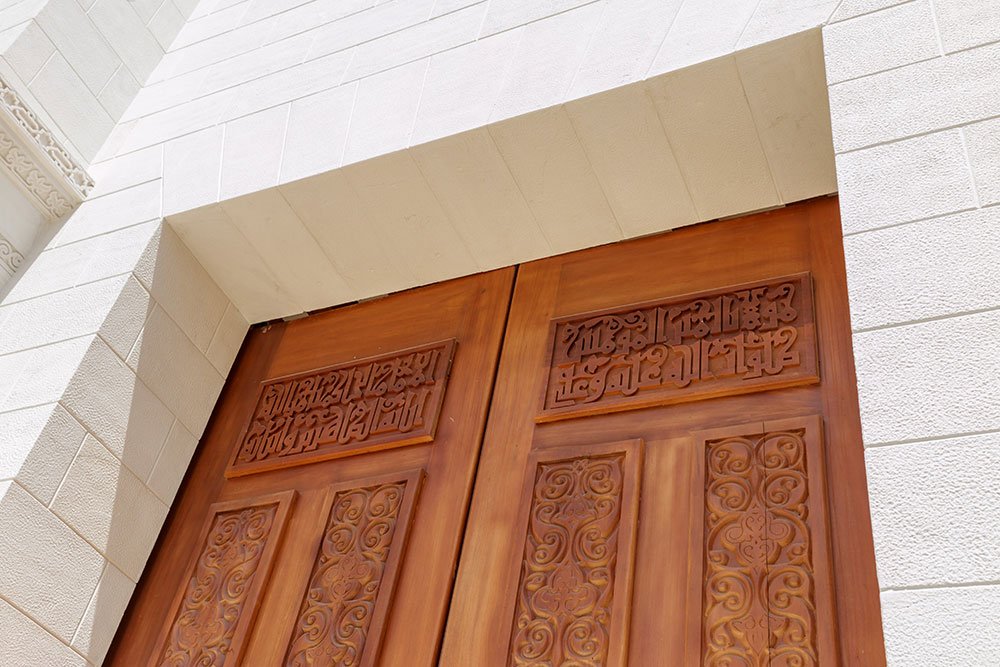 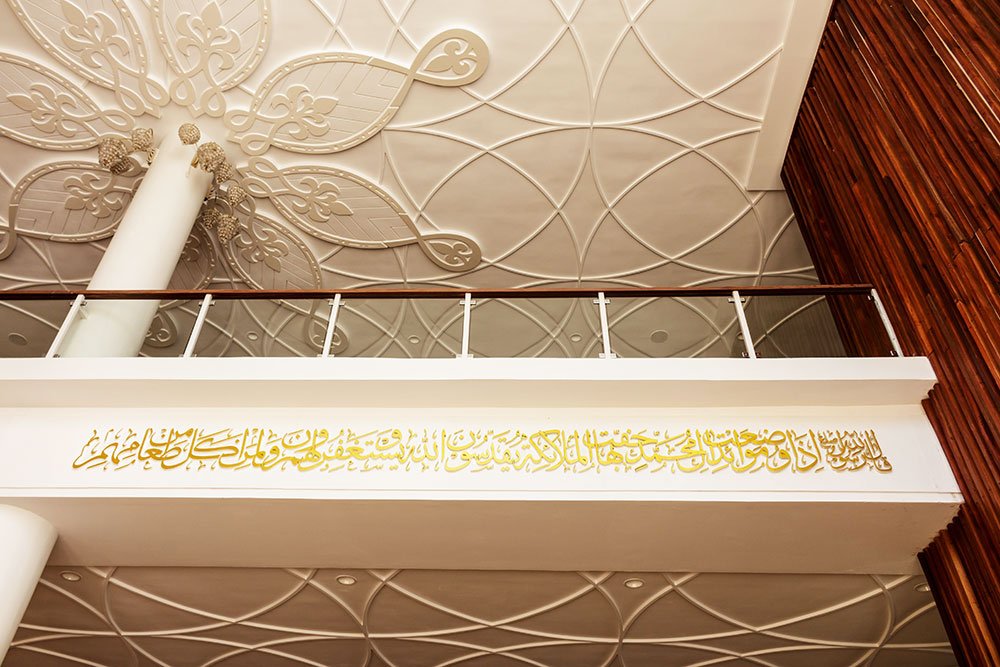 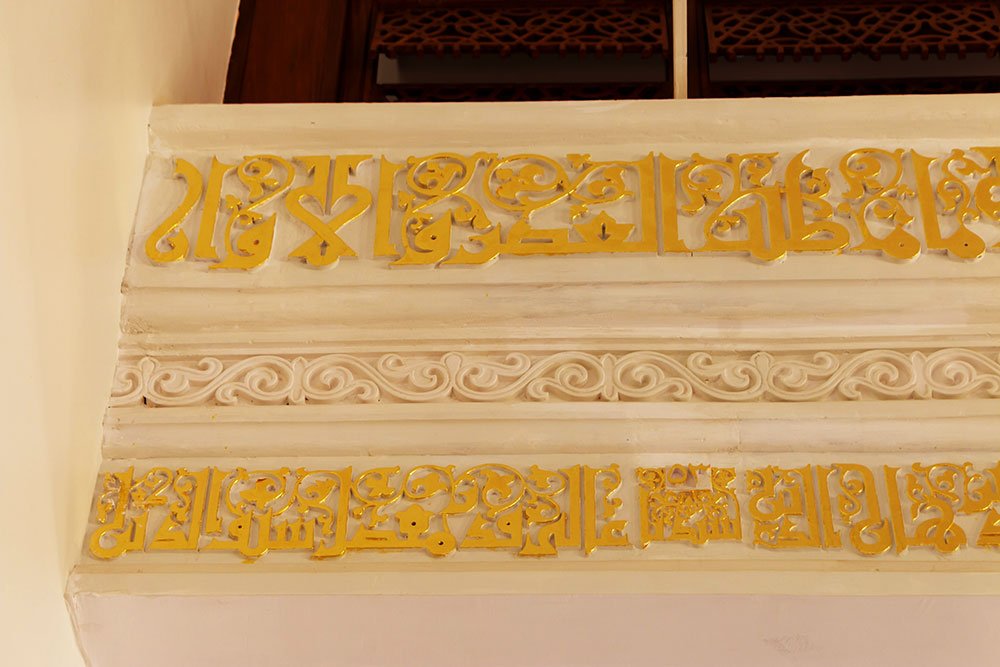 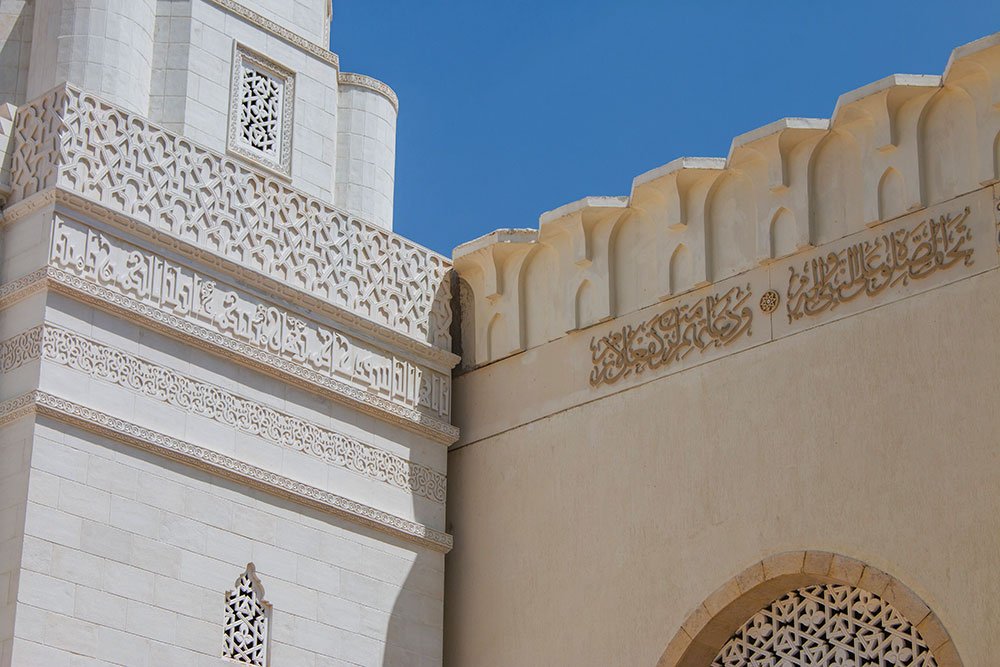 The harmonious integration within the existing Dawoodi Bohra neighbourhood known as Saifee Park in the Langata area of Nairobi.

The ability to walk without shoes, a tradition of the Dawoodi Bohra domestic culture, from one end of the campus to another using a series of covered walkways, corridors and bridges.

An emphasis on plentiful landscaping so as to create a Jamea 'within a garden'.

The compliance with requirements for LEED accreditation including features such as rainwater harvesting, composting, solar heating and photovoltaic panels for energy production.

The use of passive ventilation throughout the campus and the maximisation of natural light through large-scale glazing significantly reduces the campus' impact on the environment.

The old with the new

In the month of April 2017, after the successful completion of construction, an invitation was extended to the president of Kenya His Excellency Mr Uhuru Kenyatta to officially inaugurate the campus which he duly accepted. The president accompanied by his Holiness took a detailed tour of select buildings of the campus where certain fundamentals of design, philosophy and culture were brought to his attention. He then addressed the congregation, which comprised of various foreign and local dignitaries and invitees along with members of the community who had attended the function from far and wide in their thousands. In his address, the president congratulated his Holiness and the Dawoodi Bohra community on this great achievement and acknowledged that the Dawoodi Bohra community was the true embodiment of the spirit of peace and the values of Islam. He assured Syedna that his administration would aid and support the institution in every way and expressed his wish for cooperation and a sustained relationship between the community and his government. A brief private screening of a documentary about the history of Aljamea and the Dawoodi Bohra community was also held for the president in the state of the art auditorium.

Fatimi architecture is a tangible expression of Fatimi belief. At the inauguration of the Karachi campus in 1984, His Holiness Syedna Mohammed Burhanuddin RA stated that the Dawoodi Bohra community's beliefs have been immortalised in the arches and stones of these buildings. The new Nairobi campus of Aljamea-tus-Saifiyah is exactly that: a representation of the beliefs and ideals which have transformed and defined the Dawoodi Bohra community as the modern, educated, peace-loving, law-abiding, mercantile, religious community that it is today. With the establishment of the Aljamea campus here in Nairobi, the community celebrates its long-standing history with Kenya and East Africa and reaffirms its dedication to the development of a land that is its home, today and for generations to come, Allah-willing.