In the imagery of Karbala, the tent has always had a special place. When al-Dāi al-Ajal Syedna Mohammed Burhanuddin RA led the Ashara Mubaraka majālis in Karachi in 1417, in the very first wʿaz mubārak he informed Mumineen that they were seated before him in a khayma of bukāʾ, a tent of mourning and lamentation upon Imam Husain AS. In this historic bayān, Syedna Burhanuddin RA remarked that when Imam Husain AS gave the orders to erect the tents for his Ahle Bayt AS, he must have considered that these tents would only be pitched for a few days and thereafter they would be torched. He must have recalled:

After listing these heartbreaking incidents and many more, Syedna Burhanuddin RA addressed Mumineen and said that, ‘I, the Mamlūk of Āle Mohammed SA, in memory of the tents of Kerbala, have come here [to Karachi] to erect a tent of mātam and bukāʾ.’ Excerpts from these kalimāt nūrāniya which once reverberated against this very masjid’s wall nearly two decades ago now adorn the masjid as gold script upon a sea of green velvet. The khayma (tent) of Imam Husain AS is the central theme of this year’s Ashara Mubaraka tazyīn. 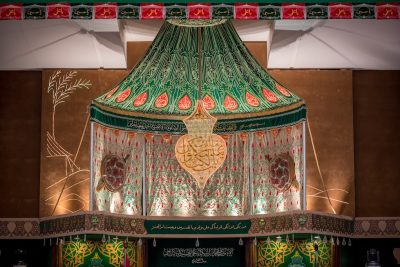 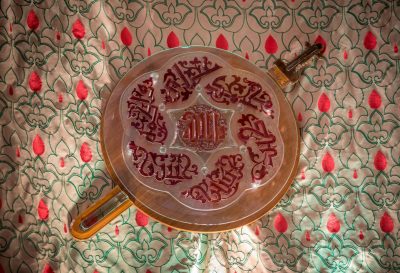 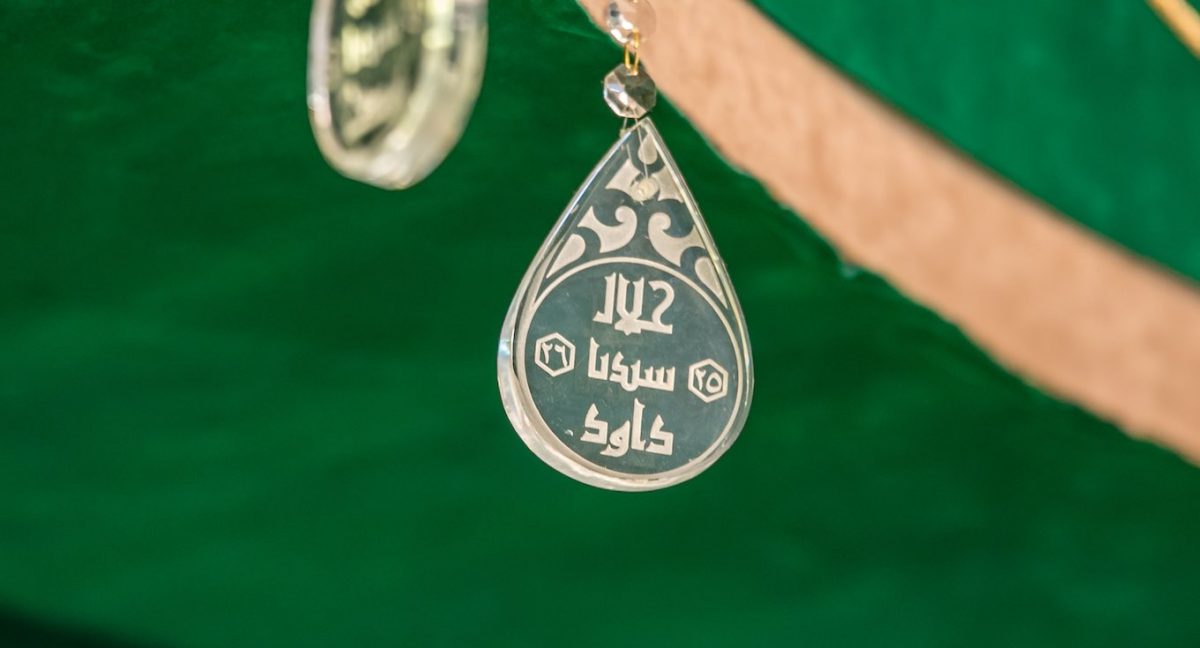 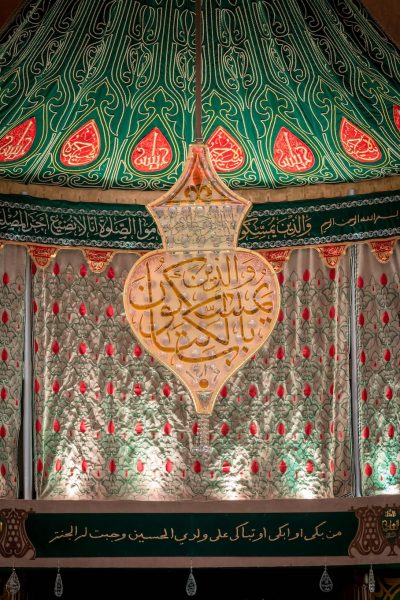 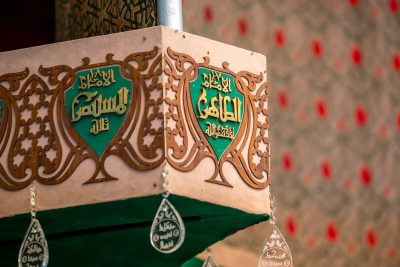 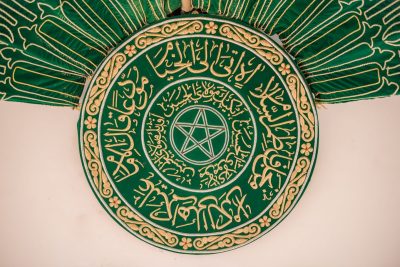 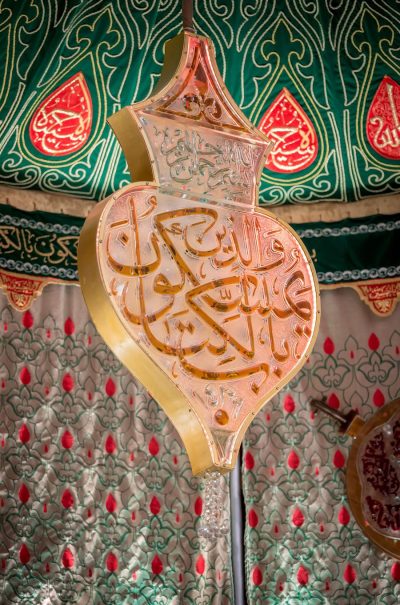 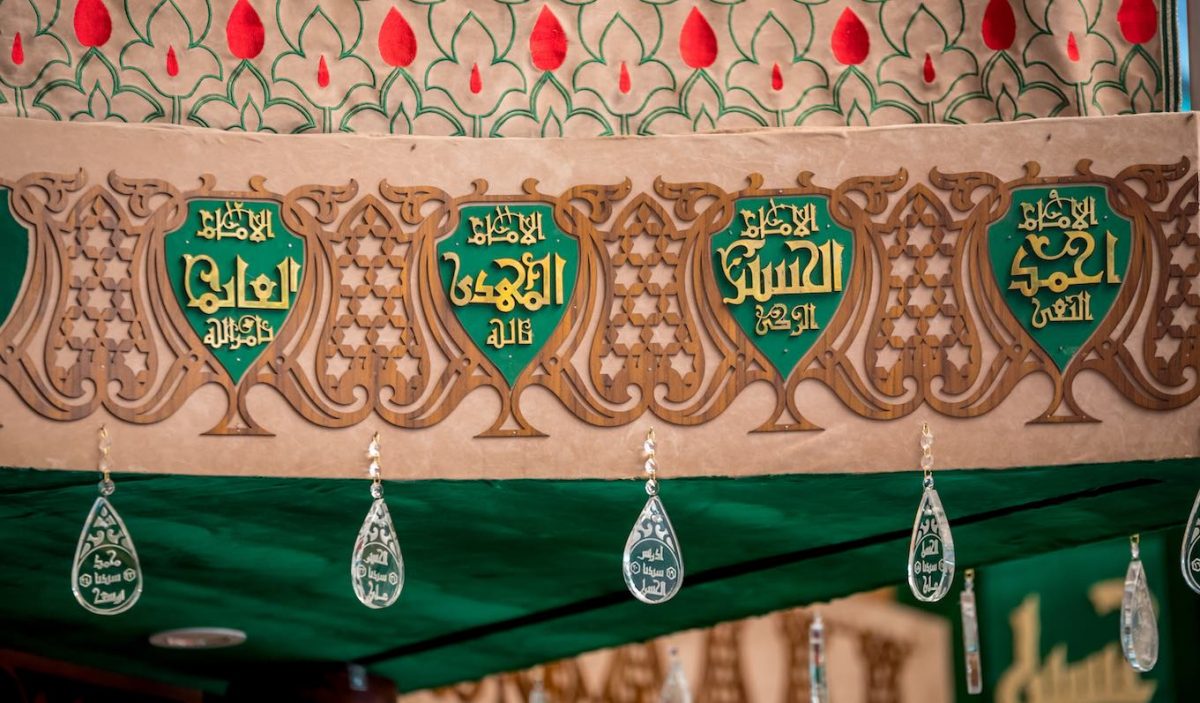 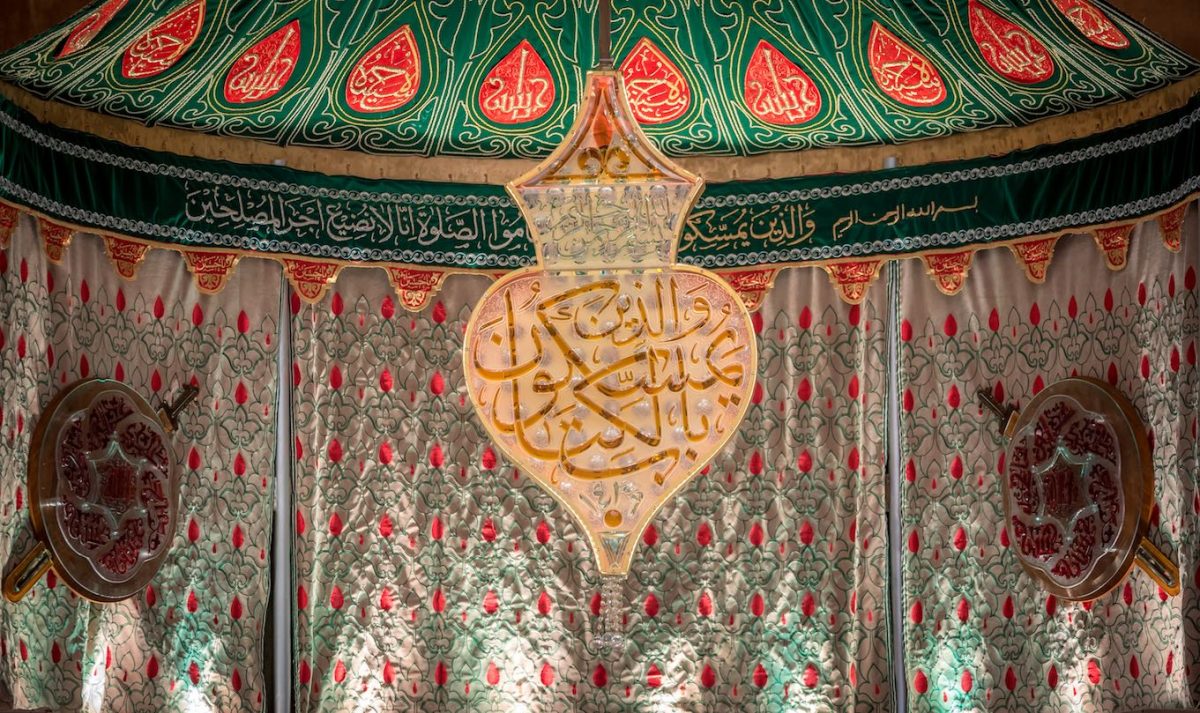 The design elements of the backdrop behind al-Dāi al-Ajal Syedna Mufaddal Saifuddin’s TUS imāmi takht mubārak are inspired by the celebrated tents of the Fatimi Imams AS. The circular shape and certain other elements are derived from historical Fatimi tents. One such circular tent was known as the Fustāt. Its walls comprised of 64 panels adorned with various imagery, its central pillar measured nearly 100 ft tall and the diameter of the roof was 30 ft. One hundred camels were required just to transport the tent and its various components. Historical sources tell us that the tent was made by the order of Maulana al-Imam al-Mustansir AS by an individual named Mohammed al-Hasan b. Abdul Rahmān al-Yāzuri at a cost of 30,000 dinar requiring the labour of 150 men over a period of nine years.

Other tents were made and used by the Imams AS as well, specifically during the ceremony of the Opening of the Nile. Tents were also used during the Mawlid celebrations and to this day can be seen at Maqām Rāʾs al-Imam al-Husain AS, Maulatuna Zainab AS and the ʿatabāt muqaddasāt (holy shrines) of other Ahle Bayt AS in the city during the festival periods. Tentmaking is so entrenched in Egyptian culture that an entire street in the city of Cairo is named Shaʿr al-Khayamiya as it has been the centre for tent production for centuries.

Fatimi tents were known for their use of exquisite materials and textiles including gold brocade, wool, velvet, Chinese silk and Dabīqi linen (named after the famed manufacturing city in Fatimi Egypt). Pillars were common to classical tents and Fatimi pillars were sometimes wrapped in silver. In some historical reports, we are told that the Fatimi imams gave special attention to adorning the interiors of these majestic tents with imagery of animals including lions, elephants, peacocks, horses and various birds.

Many Islamic tents were designed with the specific purpose of highlighting or marking the place of the sovereign. The tent incorporated into this year’s backdrop has a similar purpose. The design protrudes outwards so that the centre of the tent marked by the medallion at the top is situated above al-Dāi al-Ajal Syedna Mufaddal Saifuddin’s TUS takhte imāmi.

The tent is circular in shape and consists of inner panels of embroidered fabric that carry a tear-shaped motif. The external lining bears a hexagonal pattern and is ‘secured’ by gold guy ropes. Above the wall panels rises a series of triangular ceiling panels which demonstrate applique work, specifically large tear shaped cutouts that are embroidered with the name of Imam Husain AS in variating script. The triangular applique and embroidered pieces rise to the apex of the tent ceiling where lies a medallion, inspired by the medallion of JāmiʿJuyūshī’s mihrab dome. The hand embroidered medallion has a verse from Syedna Burhanuddin’s RA elegy Fulk al-Husain inscribed in gold thread. The verse in question narrates the events of Imam Husain’s AS final farewell at the tents of the Ahle Bayt AS.

The aayat shareefah that corresponds with the number 1439, the new hijri year, is placed at the top of the tent, just beneath the tapered roof panels. Inscriptions were normally placed at this location in Islamic tents. The āyat sharīfa is as follows:

Those who hold fast to the Book and establish Salāh, We shall never let the reward of (such) righteous people to go to waste.

The words ‘wa allazīna yumassikuna bi al-kitāb‘ equal 1439 and are carved in glass and placed on the surface of a suspended light fixture at the centre of the tent. The fixture is meant to resemble a tannur, or classical chandelier or candelabra. The Fatimi Imams AS, particularly Maulana al-Imam al-Hakim AS is known to have adorned the major masjids of al-Qahira with large chandeliers often made of gold and silver.

The backdrop is split horizontally by a protruding base which is artificially supported by wooden pillars. The pillars here incorporate Fatimi motifs from Cairo, specifically the fluted designs at the top and bottom which bear resemblance to the pillar motifs found on the facade of al-Jāmiʿ al-Aqmar. The front elevation of the base is decorated by a running design band derived from a motif from the Mihrāb Mustansirī found in Jāmiʿ Ibn Tūlūn in Cairo, Egypt. It was a practice in tent-making to use decorative motifs derived from stonework of the masjids of Qahira. Rasulullah’s SAW hadīth sharīf, ‘man baka aw abkā’, in Syedna al-Dāi al-Ajal’s TUS handwriting is at the centre underneath which is the name of this year’s Ashara Mubaraka majālis in silver embroidery. The inner qibla niche, like the external facade, is upholstered in green velvet. To each side of the qiblah entrance are flat arches at the centre of which are lamp fixtures.

Special attention was paid towards lighting of the backdrop. Fibre optic lighting helps set the external landscape scene of dunes, palms and a bejeweled desert sky. Additional LED lighting in strategic locations allows for the adjustment of colour and intensity providing mood lighting like functionality. To the extreme left and right of the Qibla are two barakati pieces of fabric. To the left, with the words ‘yā thāʾr Allah’, is a flag that was hoisted on the qubba mubarāka of Amirul Mumineen’s AS mazār mubārak in Najaf, later draped around Syedna al-Dāi al-Ajal TUS when it was brought to him by an Iraqi delegation during the taʿziyat majālis after Syedna Burhanuddin’s RA wafāt. On the right is a fabric that was draped over the inner qabr mubārak of Rāʾs al-Imam al-Husain AS in al-Qahira.

For eight days now, Mufaddal Maula TUS has given us the honour of sitting before him in his tent of bukāʾ and mātam, like his respected father did so many years earlier in this very same place. This consonance illustrates that this tent of bukāʾ is not limited by time or space; its spiritual circumference encompasses the entire world and beyond, each and every Mumin, in every period and era. Its towering height surpasses the stars and the imagery it displays includes all of Creation. Like the masjid before us, Maula TUS has adorned our souls as well with his precious words, but most importantly, with tears of gham and bukāʾ and cries of nawh and ʿawīl. May Allah Tʿāla grant him a long life of health and happiness until the day of Qiyāma and may we continue to decorate and beautify our souls with the zikr of Imam Husain AS so that on the day of Qiyāma our tents too are pitched next to Husain Imam AS and his Dāi TUS.